Renaissance architectural monument St. Peter and Paul’s Cathedral (till 1997, the church) is the most striking landmark of the city. The visitor is kind of directed to the city centre.

The cathedral dominates both due to its impressive height (the apex of the tower reaches 70 m) and the convenient and well-chosen location. This is the merit of builders of the first wooden church of Šiauliai. M. Valančius stated that it was built in 1445 under the leadership of the elder of Samogitia Mykolas Kęsgaila. Little knowledge about the cathedral remained. The visitation act, dated 1629, says that it was wooden, old, decaying, and on its left a new brick church was being built.

The construction of the new church began around 1617. It is considered that it was initiated by Samogitian bishop Mikalojus Pacas, while the key sponsor was the governor of Šiauliai economy Jeronimas Valavičius. Construction works were led by the dean of the church, the graduate of Vilnius Academy Petras Tarvainis. On October 8, 1634, the bishop of Samogitia Jurgis Tiškevičius consecrated the new church of Šiauliai. It is interesting that for the city residents’ money a mechanical clock in the church tower was equipped.

The view of the 17-century architectural monument reached us slightly altered. Wars and storms devastated the church time and again. The church building was destroyed during World War I, but it mostly suffered during World War II. Wooden parts of the building burned down (the roof, tower ceilings, stairs and the apex, interior fittings); art works, altars, organs, furniture turned into ashes.

After the war, restoration lasted long: reconstruction works were completed only in 1956. On May 8, 1997, by the decision of Pope John Paul II Šiauliai diocese was founded. The church became St. Apostles Peter and Paul’s Cathedral. The rector of Kaunas Theological Seminary priest Eugenijus Bartulis was appointed the first bishop of Šiauliai. 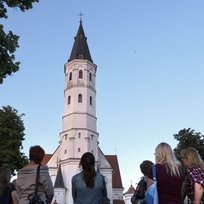