THE HILL OF REBELS

This is the place of burial of rebels of the uprising in 1863-1864, who having been sentenced to death, were shot and hanged right here. At that time, the hill overgrown with trees and bushes was on the outskirts of the city. Over time, this place was started to be called the Hill of Rebels. The construction of the hewn granite monument-obelisk according to the design of engineer Karolis Reisonas started in autumn of 1931.

The monument was unveiled on May 30, 1935, having buried human remains of eleven rebels, which had been found tidying the area of the hill, in its foundations. In 1957, the monument was reconstructed, placing the sculptural group consisting of three figures “Rebels of 1863” made by sculptor Antanas Dimžlys in the front. In 1988, the monument was restored according to the design of engineer Karolis Reisonas, returning the original authentic appearance to the monument.

Due to the convenient and beautiful place, during World War I the slope of the hill was used by Germans for burying their soldiers. First graves of killed pilots appeared on the slope of the Hill of Rebels near Vilnius Street in 1915.

In addition to German soldiers, Tsarist Russia army soldiers were buried in this cemetery too. In 1941-1944, the cemetery was extended up to the monument to rebels, burying German soldiers who were killed in World War II. 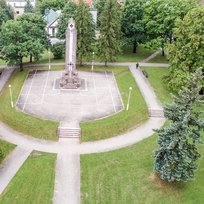 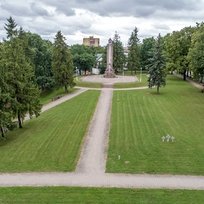 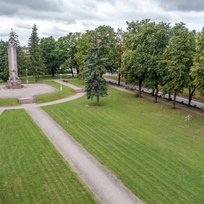