In 1975, we were brave: the third in Europe (after Rotterdam in 1972 and Erfurt in 1973) and the first in Lithuania who turned the central part of Vilniaus Street (1,28 km from Žemaitės Street to Draugystės Avenue), which belonged to vehicles, into a boulevard. Šiauliai Vilniaus Street, like Tilžės Street, built in the 18th century, is a historical road leading from the east to the west; while Tilžės Street, from the south to the north.

We decorated the pedestrian boulevard with original sculptures of small architecture, volumetric adverts, again pleasantly cheering and surprising everyone and turning the boulevard into a cosy and the most important Šiauliai residents’ place of leisure, recreation, entertainment and trade: this is where celebrations bustle, cosy cafes are located, here we rush to work and rest. Artists decorate the city every year with artistic graffiti, some of which are also in the pedestrian boulevard, so look round.

Travel and feel the uniqueness of Šiauliai city!

Numbers speak:  You will find over 50 interesting objects on the pedestrian boulevard! 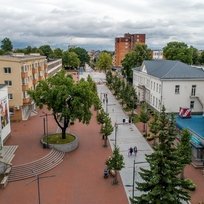 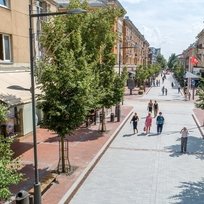 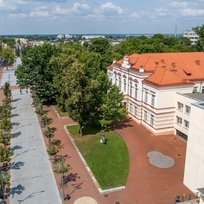