THE HILL OF CROSSES

In the Middle Ages, there stood a wooden castle on this hill, called Kula in the chronicles. It was destroyed by the Livonian army in 1348. For many years, the hill called Pilis, Maldavimai, Jurgaičiai, Domantai Mound, stood bare. Local people told that the first crosses had been built in the middle of the 19th century, praying God for grace and health, because people considered this hill to be a holy place. Others claimed that it was started to build crosses to remember those who were killed in the uprisings of 1831 and 1863 against the Tsarist Russia. After suppressing the uprising, the occupation authorities prohibited construction of crosses and destroyed the already built ones.

Despite all this, throughout all period of Lithuania’s occupation, the Hill of Crosses remained a symbol of heroic resistance and belief in freedom. 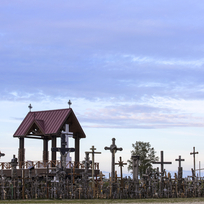 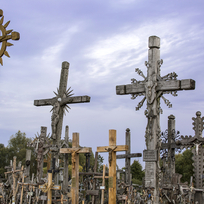