It is a constituent of the advert of the pharmacy Valerijonas. This is probably the most famous piece of metal plastic in Šiauliai, and it would be wrong to attribute it to volumetric advert accents placed on the boulevard. As a constituent of the pharmacy’s advertising, as décor of the building and as a work creating the city’s artistic mood, the cats were merely “crumbs” of a complex idea.

The cats were folded from tin according to the designer’s involutes by Kęstutis Einigis, who at that time, worked in the “advert office” of the Šiauliai trade board. This work of metal plastic became a kind of notability, a sentiment of the city. It is well-liked by townspeople, willingly showed to their children, guests and tourists. This accent made Šiauliai famous worldwide when in 1984, the allied media agency APN distributed the photo of cats to all world’s agencies. 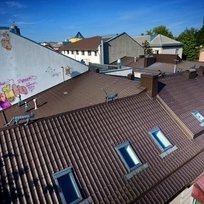